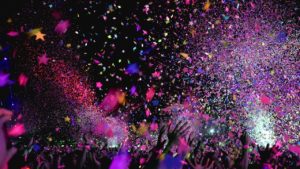 Empower through music… The words we run TRP Berkshire by, the foundation on which we built our music school. We want to give children a voice; the opportunity to learn, play and create music.

Music is soul food. It provides respite, friendship, peace, a platform for politics, for freedom, for change.

This is a great week for music this year with festivals across the country celebrating different genres of music, with many of the artists responsible for creating new sounds, new genres and new voices for music.

Take, for example, Jamiroquai, who are performing at The Boardmasters Festival in Newquay from 9th August. Over twenty years ago, the newly formed band became synonymous with the UK funk and acid jazz genre, revolutionising and fusing new styles of music together. For those of us who witnessed this awakening it was magical, funky and uplifting. It created a buzz. This is the same buzz we inspire in our students – we encourage them to create and feel that buzz.

Speaking about the band’s new album Automaton, singer Jay Kay commented: “I love the buzz of starting with a blank sheet of paper then seeing songs come together, especially when you see and know when they’re finished, and when you are overdoing or overcooking them, and when you feel you’ve got it right.”

One of our junior guitarists is already a keen songwriter and is using the knowledge we have taught him to write his own songs with music to accompany them!

Music can give a voice when it might not always feel like you have one and we see this with our students as their confidence flourishes.

Many bands and artists use music as a forum for politics. The Specials, who are performing at The Boomtown Festival in Winchester from 10th August, began at the same time as Rock Against Racism, back in 1978. According to Jerry Dammers, anti-racism was intrinsic to the formation of the Specials, commenting many years ago: “Music gets political when there are new ideas in music …punk was innovative, so was SKA, and that was why bands such as the Specials could be political.”

We embrace all cultures and genres at TRP Berkshire and are lucky that we have such talented tutors who can teach such diversity and style.

Check back next week when we explore giving children a voice…